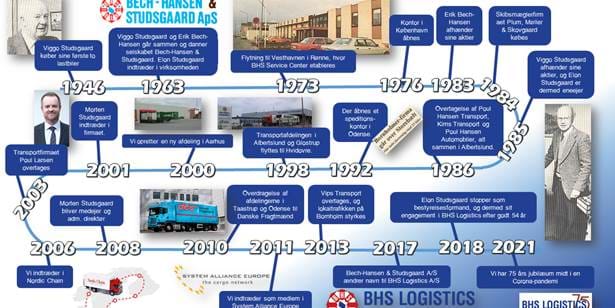 It all began with fish..

Haulier Viggo Studsgaard started in business for himself with a couple of lorries in 1946. This was the beginning of a large nationally-known transport company, which presently has more than 70 motorised units and more than 300 trailers of every type at its disposal.

1962 The haulier business moves to Strandvejen 1 in Rønne.

1973 Relocation to the West Harbour in Rønne, where the BHS Service Center is established.

1976 Opening of office at Fragtmandshallen in Copenhagen.

1977 Construction of terminal in Rønne. Lorries are moved from the area where ferry berths of Bornholm’s ferry company, BornholmerFærgen, are located today.

1983 Erik Bech-Hansen divests his shares in the company, thereby withdrawing from the business.

1985 Viggo Studsgaard divests his shares in company, leaving Elon Studsgaard as sole owner of the business.

1986 Acquisition of Poul Hansen Transport, Kims Transport and Poul Hansen Automobiler, all located in Albertslund, Denmark. Bech-Hansen & Studsgaard is named “Business of the Year” by the Andelsbanken bank on Bornholm.

1992 Opening of freight-forwarding office in Odense.

1996 Bech-Hansen & Studsgaard A/S celebrates its fiftieth anniversary in the sector.

1998 The transport department is relocated from Albertslund and Glostrup to Hvidovre due to a lack of space.

2000 Establishment of new department in Aarhus.

2004 Expansion of head office. Relocation of Aarhus department into new and bigger premises.

2005 Merger of Transportfirmaet Paul Larsen A/S with the parent company.

2011 Bech-Hansen & Studsgaard is certified to ISO 9001 by Bureau Veritas for its freight-forwarding activities at the Hvidovre and Hasselager departments.

2012 Bech-Hansen & Studsgaard is certified to the ISO 14001 environmental management system by Bureau Veritas.

2013 Elon Studsgaard divests his shares in company, leaving Morten Studsgaard as sole owner of the business.

2013 Acquisition of Vips Transport Aps, which is subsequently merged into the company.

2016 The two shippingnames – Plum, Møller & Skovgaard A/S and Ejv. Hansens Eftf. A/S, which manage all types of ship-traffic servicing – are merged under the name BHS Shipping.